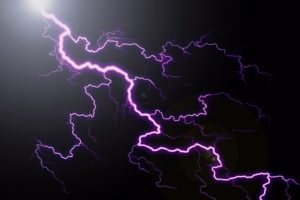 Originally published in GreenMan magazine in 1995.
This piece was my first real publication credit.

Words cannot begin to describe the powerful effect of the storm, but I must make do with what I have. From the first odd, orange colorations of the sky as dusk approached and the clouds rolled in, bringing with them the distant rumble of warning, to the first flashes seen in the distance like some great cosmic fireworks, it was apparent that the storm was going to be rather magical. And we were not disappointed.

We began on the front porch, simply talking and joking, but the power of the atmosphere quieted us down as the clouds thickened, until we were left talking only about the storm. As the last vestige of bright sky was swept away in the angry clouds, we felt the last of the breeze, and an ominous quiet seemed to fall into place; a calm that could only precede a storm.

Still hot and sweating from the oppressive heat earlier in the day, we welcomed those first few drops, huge wet kisses from the sky. As the intensity of the rain increased, it was no longer enough to feel it misting down through the leaves of Grandmother Maple; I needed to seek an open area where the wind and the rain could caress me without interference.

Standing in the backyard, the deluge began in earnest, accompanied by the continuing rumble of Thor’s hammer as the lightning flew across the sky in patterns never before seen, and never to be seen again, each a spontaneous, instant work of art. The energy was fantastic, and in the midst of this energy I felt the rain cleansing me, not only washing the sweat and dust from my skin but also deeper, cleansing down to the soul itself. I felt my feet connecting to the Earth herself, while my head was lifted high into the midst of the storm, a channel of energy flowing through me.

I faced each of the four Guardians in turn, thanking them for their part in bringing the storm to me and working this wondrous effect upon my soul. In the East, I thanked the Air for transporting the clouds and the electricity to me, and allowing it to move through the atmosphere. In the South, I thanked the Fire for evaporating the water and allowing it to be pulled into the Air, and for the spark that on such a huge scale is lightning. In the West, I thanked the Water itself for allowing itself to be moved through the air in such a fashion, cycling continuously through the world. And finally, in the North, I thanked the Earth, for providing the environment to allow it all to happen. Throughout it all, the rain continued to beat in torrents across me, cleansing deeply.

As the rain subsided, I returned to the front porch, joining in for an inspired chorus of rather appropriate songs that had begun in my absence. We drew close, still singing softly of the Earth and Air and Fire and Water within us, as the lightning, now distant, continued to paint across the magic canvas of the sky. The last flash of lightning, quite symbolically we thought, was not unlike a broomstick flying across the sky. We turned to go in, a little cleaner, a little wiser, and more fully connected with our faith than ever before.