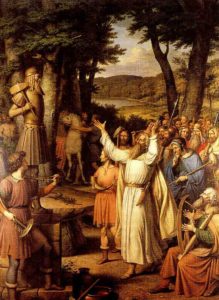 Recently, my spiritual storytelling class spent an evening on the topic of repentance, and each of us was to bring along a tale from our respective traditions that clarified the meaning of the term. For my friends and colleagues practicing in the Abrahamic faiths, such tales abound, but what about a modern Heathen?

There’s no shortage of tales in the lore covering the costs of dishonoring oneself, but the idea of repentance depends on a related concept that we, like most neo-Pagan paths, do not share with our neighbors: that of sin. How can we commit a transgression against “God’s law” when our gods neither provide us with such laws nor stand in judgment of us? It is much more likely that we will be judged by our community than by our gods – if our greater community continues to like us, then we have little to fear from our gods.

Nonetheless, attempts to codify behavior across the wider swath of Heathenry are occasionally made, such as the various versions of “Nine Noble Virtues” or NNV. These are generally considered as Courage, Truth, Honor, Fidelity, Discipline, Hospitality, Industriousness, Self Reliance, and Perseverance. While few would argue that these concepts can each be considered as recurring themes throughout much of the surviving lore, the specific meanings of each of them can be called into question depending on circumstances. There are too many possible occasions when meeting one ideal might cause another to be set aside. For these reasons, plus the somewhat arbitrary way in which such lists of virtues tend to be assembled in the first place, the concept of the NNV tends to cause a lot of head shaking in Heathen circles. Regardless of viewpoint, such lists are considered as rules for living day-to-day in our communities, not as ironclad rules that, if broken, directly offend the gods.

Are there any rules which might establish a basis for something like “sin” in the Heathen worldview? One recurring theme in the lore is that of oath breaking. I’ve seen arguments that a distinction should be drawn between breaking a personal oath, e.g. “I vow to lose 20 pounds” and one which places the wider community at risk, e.g. “I vow to defend my village against attack.” I’m not so sure that such a distinction can be drawn – the mythology contains too many stories of an individual committing actions against his own community because he has been forced to swear a vow that he will do so. Oath-making is taken seriously now as it was then – the act of breaking an oath was beneath the contempt of our ancestors!

Without “sin” there is no “repentance,” yet there is opportunity for “redemption.” In this worldview, everyone is responsible for personal actions and consequences, and with the Germanic idea of gift reciprocation, just as every honorable act leads to some reward, every dishonorable one must be paid for in some way. Here the concept of weregild comes to mind – our ancestors placed a value on everything and everyone. Stolen property, persons injured or killed – in most cases the perpetrator could pay a restitution to the victim’s family or to property owner.

There’s an implication here. If I commit a transgression against a member of my community, I can redeem myself through a payment of some sort. If I commit a transgression against my gods, I believe a similar relationship exists. The nature of a transgression is likely to be one of oath-breaking – if I swear to a deity, or to a member of my tribe, that I will do something, it is up to me to do that thing, or make an appropriate payment, not unlike the weregild mentioned above, but usually agreed upon in advance. I cannot simply beg forgiveness, but actually atone for what I have done. That’s why oaths are often phrased the way they are, with a price attached. “I will quit smoking by Dec 12 or donate $100 to the Cancer Society” is a well-formed oath. “I will lose 20 pounds this winter or die trying” should raise objections.

As Heathens, we lack a concept of sin, but possess a code of personal honor. We lack repentance, but there are avenues for redemption. We do not so much fear standing in judgment of our gods so much as we do our community – for we can live on in the deeds that our descendants speak of long after we’ve crossed into the next life.